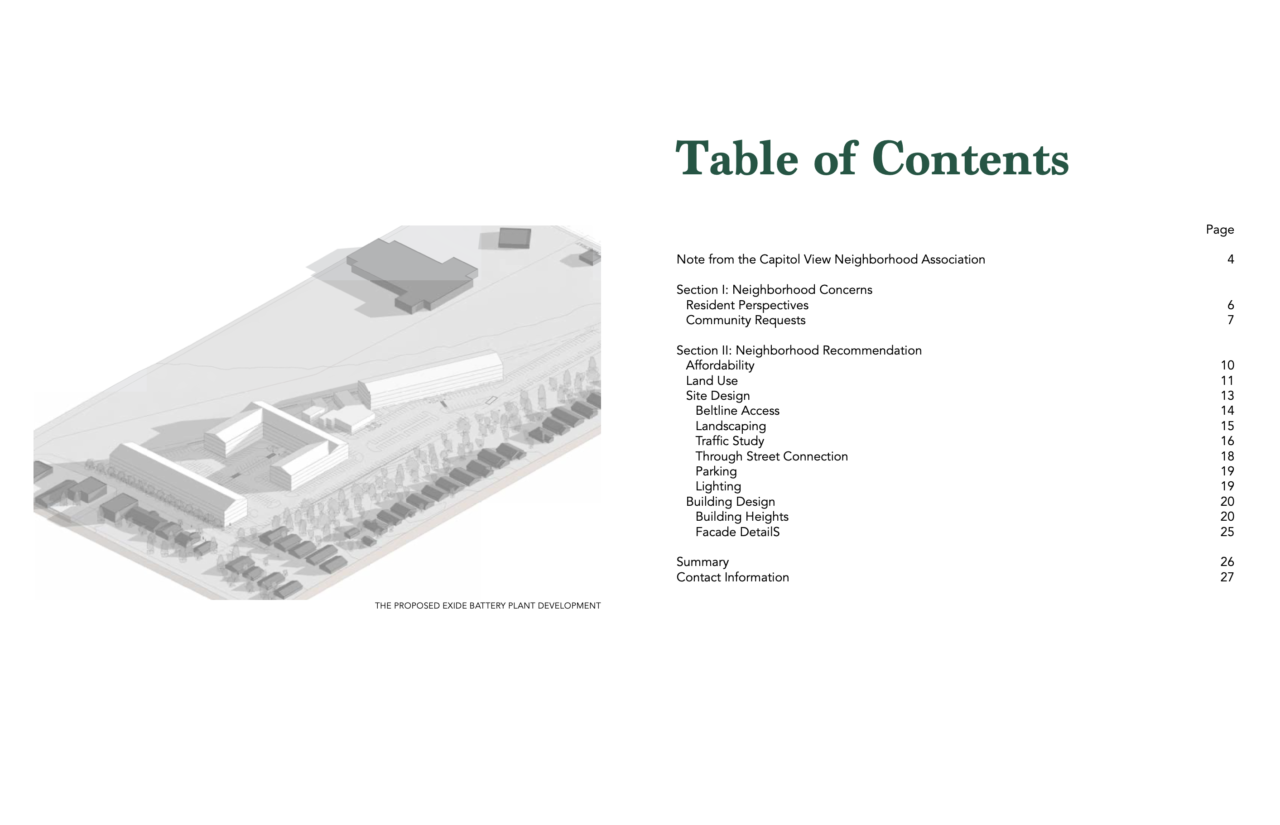 A note from the Capitol View Neighborhood Association

We provide the attached report of recommendations for the proposed Rangewater development, situated on the former Exide Battery factory site, located at 1246 Allene Avenue. We have discussed the development directly with Rangewater representatives and have reviewed available documents pertaining to the site plans. After much research and deliberation, we cannot support the proposed development as it is currently envisioned. To be clear: we are not opposed to the development of the site, nor do we have any issue with the increased residential density that the plan proposes. Rather, we find that the design of the site plan does not encompass the quality and value of a development that the surrounding neighborhoods and residents deserve. We welcome change, but we insist that a development of this size and impact be more carefully crafted to provide value to existing residents and greater opportunity for versatility well into the future. Our detailed recommendations–which address building scale, BeltLine access, land use, housing affordability, among other topics–follow this letter.

We would like to preface our recommendations with a reflection on Rangewater’s approach to the surrounding neighborhood and the NPU. Our principal impression is that Rangewater has rushed through the process of presenting its plans to the neighborhood, requesting support for their SAP application without providing the courtesy of adequate time to process the plans or give proper feedback. To be frank, they have sown widespread distrust among the residents of the neighborhood. Had Rangewater presented its plans well in advance of applying for the SAP, it could have acted to incorporate some community recommendations into the application itself. Instead, Rangewater’s representatives chose to file the SAP first, beginning the clock on the 21-day feedback window before they even so much as introduced themselves. Beyond communicating that it did not really value the opinions of the neighborhood, Rangewater also offered a false impression that the neighborhood’s input should take the form of an up or down vote of support–that our recommendations would not matter and that there was really not time to change things. As it stands, Rangewater will present to NPU-X for the first time at their general body meeting on October 12th, which is actually after the initial deadline for SAP feedback (October 10th at 12pm), a situation which would have given the NPU no input on the SAP application. Thankfully the city planner reviewing the application agreed to extend the deadline until after NPU-X meets. Realizing the narrow window provided to the NPU, the Capitol View Neighborhood Association quickly formed a committee to review the development, survey neighborhood feedback, and draft a response to present to the NPU for adoption.

We urge the reviewers of Rangewater’s Capitol View development application to pump the breaks on what appears to be a rushed effort to develop an important parcel of real estate: one that comprises the entire stretch of the Capitol View neighborhood’s direct beltline access and sits squarely between the Pittsburgh Yards site and Murphy Crossing. The impact that this development will have on the BeltLine corridor cannot be overstated.