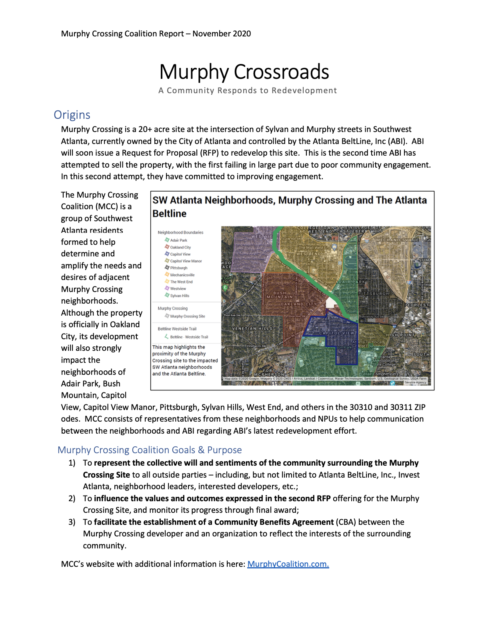 The initial partnership between the Murphy Crossing Coalition (MCC) and Atlanta BeltLine Inc. (ABI) came with three data points upheld by MCC as critical to the RFP process. These points would ensure that the work undertaken by MCC would bring results, not just head-nods. MCC released a survey (primarily covering property layout, density, transportation requirements, and other relevant development concerns) at the end of August, and by November 6th it received over 1,000 responses from surrounding community members.

This overwhelming engagement proves that ABI should not only understand, but act upon the fact that our community has demands, requests, and suggestions. The enclosed report will address these items with exception of the demands, which we will address here.

Murphy Crossing Coalition Demands:
(1) That there be a MCC-selected Community Representative in the RFP process who shall also have a weighted vote in the selection process (i.e., not simply provide advisory input);
(2) That the RFP include a Community Benefits Agreement (CBA) requirement; and
(3) That ABI formally abolish the so-called “required” Cone of Silence.
(4) That the RFP require developers to begin the infrastructure for BeltLine Transit and a Murphy Crossing infill MARTA station.

Demand One: That there be a MCC-selected Community Representative in the RFP process who shall also have a weighted vote in the selection process (i.e., not simply provide advisory input).

The neighborhood members comprising MCC have been involved in the RFP Advisory process since mid-July 2020. In August, we requested that ABI assign a community member to the RFP review process. That request was initially rejected, but MCC persisted. As an ill-defined concession, ABI finally selected a community liaison in September whom they say was approved by the City Council and/or the Mayor’s office.

This liaison does not live within the ABI determined impacted neighborhoods, nor have they been a part of the MCC process. Three supremely-qualified community members exist within MCC, and we are beyond confused as to why ABI did not consider or choose one of them for the role instead. Two are Chairs of NPUs and the third is on the Fulton County Development Authority. These members are qualified and have earned the trust of governments in the geographical location and have been elected by neighborhoods to represent their neighborhoods.

Demand Two: That the RFP include a Community Benefits Agreement (CBA) requirement.

Initially, ABI told MCC that even if a CBA proved important to the community, they would be unable to legally include it in the RFP. MCC accepted this as fact, despite there being no proof of that claim. As a compromise, the ABI Community Engagement team agreed to include points in the RFP stating that neighbors would request a CBA with the selected developer.

With only three scheduled stakeholder meetings and two scheduled public meetings remaining, word spread that ABI had reneged on this agreement. When asked for clarification in a public meeting, ABI confirmed that there would be no mention of a Community Benefits Agreement. (Note: they had not volunteered this information prior to being directly and publicly asked!)

The MCC survey received over 1,000 responses and is the primary tool being used by ABI to inform the RFP

guidelines and verbiage. For the sake of emphasis, ABI is literally using the MCC survey to craft their RFP, and yet the most important item highlighted by the community survey is being ignored. Given this, it is unconscionable that with an 86% positive response rate regarding inclusion of a CBA that ABI would not include it. Surely they stand to lose nothing and only to gain significant goodwill from community members who regard this organization with suspicion.

Developers must be able to solicit community feedback for their bid. The Cone of Silence is an unnecessary barrier to civic participation and community engagement, and we reject the premise that ABI gives for its use.

The developers use the RFP to create initial plans. During this, they should talk to community members (i.e., community engagement) to refine their ideas. The idea of a developer not talking to the population they will impact during planning seems both draconian and to be an undue burden on the developers themselves in trying to work with future neighbors. This is not the way it’s done throughout the rest of the city—an example being the robust community engagement between Carter & Associates, LLC with the neighborhood of Summerhill. Their example is precedent.

Demand Four: That the RFP require developers to begin the infrastructure for BeltLine Transit and a Murphy Crossing infill MARTA station.

The official citywide transit plan includes several projects within Subarea 2, where Murphy Crossing is located. The Subarea 2 draft Master Plan (March 2020) states that it “puts forth a high level, citywide vision for growth. Its purpose is to articulate an aspiration for the future city … [and] to guide growth and transform Atlanta into the best possible version of itself.”

The first item mentioned in this transit plan regarding Subarea 2 includes BeltLine Transit and a Murphy Crossing infill MARTA station. This RFP must include language for the developer to begin the infrastructure for such a project. It is not just critical to Southwest Atlanta and the adjoining neighborhoods, it is also the perfect time to begin the process. With the Gulch no longer an option as a major transit hub, Clayton County Transit a reality, and the planned Campbellton Road Light Rail project, MCC believes that if we lose this opportunity it may never come again.

—
We find ABI’s current position on the four above demands unacceptable not only from a moral standpoint, but also because ABI has not provided any of the requested legal justifications for their positions. When ABI claims the existence of regulations and ordinances without evidence thereof, they cannot simply expect Atlanta citizens who have historically disenfranchised to blindly accept their word as rule.

We request nothing unprincipled, unreasonable, or outlandish. We request only just and mindful treatment from the agencies who seek to change the landscape of our very homes and lives. Though some items listed here may be unprecedented, it takes only a little heart and common sense to understand the importance of standing on the right side of history as we all seek to build a city and future that represents the true spirit of Atlanta.